Decades of continuous implementation of computers in the area of remote supervision and control presented a good starting point for realization of an integrated distributed control system. Since year 2004, the Institute’s subsidiary company Automation & Control Ltd. has worked intensively on the implementation of the system “VIEW Power DCS”, which made a framework for distributed control and management in hydroelectric (VIEW H-Power) and thermoelectric (VIEW T-Power) power plants. In that light, for system monitoring and control, data archiving and analysis, statistical and other data processing, and whatever is more needed, the latest and most advanced VIEW software packages were used – currently VIEW4 program package.

The recognizable characteristics of the View T-Power solutions, which were implemented in thermoelectrical power plants, are: 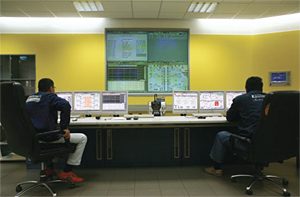 The up-to-date equipment integrated into DCS systems contributes to the more reliable supervision, improved setup regulation and higher-level automation in the thermo block control. In addition, the higher operational security, process optimization, enhanced operational efficiency and flexibility, shorter start-up and shut-down times, and faster fault detection and correction were achieved. The benefits were obvious in reduced operational production costs, what made the thermo block usage more economical and the quicker return of investments (ROI). It is worth to mention that losses of a single day interruption in the operation of a smaller size thermo block is estimated to dozens of thousands Euros, while for larger size blocks it could reach several hundreds thousands.

Computerized supervision and archiving of generator’s process data, as well as simple and comprehensive numerical and schematic presentation of data trends (data changes in time) offer a valuable statistical base to estimate lifecycles of the major and most critical parts of the thermo block equipment. Furthermore, it makes planning of the production, usage of units and scheduled repairing more effective, increases the operational reliability with reduced production costs, and prevents undesirable damages.

The package View H-Power provides an extended data processing (volume and time), while new reliable sensors and multiple (redundant) data measuring equipment warns and alerts operators to time-critical events (like for example, violation of certain process parameter values). In that way, the basic hydroelectric equipment is additionally protected of high wear rates and damaging, what is beneficial for longer equipment lifecycles. User-friendly data presentation and visualization, customized to real operational needs, provide comfortable and easy online monitoring. Data archiving and post-analysis of system behavior (both, equipment and personnel) improve diagnostics and prevention of future problems in the production.

One of implementations is: 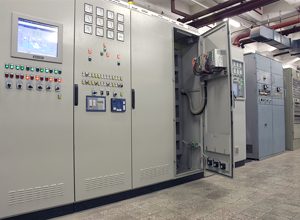 PC “Djerdap Hydroelectric Power Plants” – 1.328 MW of installed power capacity (that presents about 15 % of the total installed electric power capacity) provides 20% of the total electrical energy production in the Electric Power System of Serbia. It consists of HPP “Djerdap 1”, HPP “Djerdap 2”, HPP, “Pirot” and HPP “Vlasina”. The DCS implementation (the contract signed between IMP-Automation & Control Ltd. and the Public Company “Djerdap Hydroelectric Power Plants” in 2006) included the delivery of equipment and spare parts for an overall modernization of the control boards of the generator units and block transformers in HPP “Đerdap 2”. That was a “trigger” project in the modernization of hydroelectric power plants that has given an opportunity to the Institute’s specialists to explore and find the best possible solutions in the management of the hydroelectric power production.