Tesla Awards to Our Colleagues

At the joint meeting the Boards of directors of the Foundation “Nikola Tesla” and Association “Nikola Tesla”, on the proposal of the Committee for the award of “Tesla Award” consisting of prof. Miloš Nedeljković PhD, President and Emilija Turković MSc, Secretary, and members prof. Aleksandar Smiljanić‚PhD, Dragan Kovacević PhD, Scientific Adviser, prof. Srđan Bošnjak PhD, brought a decision on the Tesla Award for Creativity in 2014 and 2015. 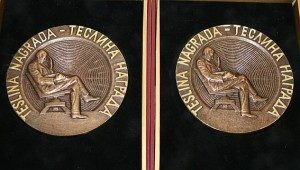 Tesla Award is given in several categories. Thus, in the category “State-of-the -art engineering technical and technological achievements”, the award went to a team from the “IMP-Automation & Control Systems” Ltd. for the regulation and management of the Simulator Training Device of the technological process and control system for the entire thermal power unit of series ARS AMEG 30.  Individually are awarded the authors of this achievement: Nebojša Radmilović, Milena Milojević, Vesna Petkovski and Tamara Jovanović. The prize was awarded to them on the 29th March at Zlatibor during the 33rd International Conference “Energy 2017”.

The awarded ARS AMEG 30 simulator – training system represents simulation of the technological process and distributed control system of the thermal power plant. Training system realistically reflects the physical system behavior of thermal power plant in all working regimes. ARS-AMEG simulator is very adjustable and configurable and can be extended and modified in accordance with equipment changes and user requirements. Simulator of the thermal power plant and DCS is an example of modern computer power in energetic, which can be found in only a few companies in the world.

Tesla’s special prize was awarded to our company IMP-Automation and Control Systems Ltd. Belgrade for the “Achievement of the objectives of the Foundation in organizations”.