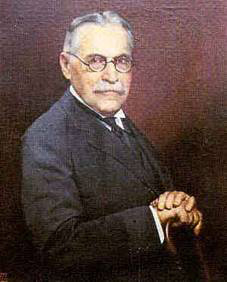 Mihajlo Pupin was born on October 9th, 1854 at Idvor, which was part of the so-called Military Frontier of Austria, where the settled Serbs were technically Austrian subjects but were allowed to retain their language and customs.

Mihailo Pupin’s parents were illiterate but intelligent and well-respected farmers, who brought up their son in the spirit of the maintaining and cultivation of old Serbian traditions. The young Pupin acquired his basic knowledge in his mother tongue, reading, writing and arithmetic, at the elementary school in Idvor. His schooling was continued at Pancevo in 1869, where he was lucky to have good teachers, particularly in the natural sciences. In 1872 he was sent for further schooling at Prague. He stayed there for a short period, and following his father’s sudden death, he decided to travel to America. He arrived in the United States at the end of March 1874, but as he had not completed any school or apprenticeship, and without knowledge of the language, he experienced a very hard time in his first years living in America.

He managed in the autumn of 1879 to pass the entrance examination and become enrolled at Columbia College. After graduation in 1883, he received a scholarship for further studies in theoretical physics. The following six years he spent studying physics and electrical engineering at Cambridge, England and Berlin, Germany. In Berlin Pupin devoted himself to physical chemistry, and under the mentorship of Herman von Helmholtz, he prepared his doctoral dissertation entitled, “Osmotic Pressure and Its Relationship to Free Energy”. He successfully defended his dissertation in 1889.

Pupin’s academic career began in 1889 as a lecturer at the newly established Department of Electrical Engineering in the School of Mines of Columbia College in New York. Shortly afterwards he was appointed associate professor, and in 1901 professor of electromechanics. At the Columbia College, Pupin first lectured in mathematical physics, then in termodynamics and hydraulics. His first major success in scientific work was in the field of investigating the harmonics of sources of alternating currents. This work gave rise to Pupin’s invention of multiplex telegraphy, which discovery he protected with several patents, and technology developed on this basis is still being applied in the most modern telecommunication systems. Only two months following the discovery of X-rays, Pupin made successful prints, and after only three months of research, he succeeded in arriving several original discoveries, which on April 6th, 1896, were communicate to the New York Academy of Science. Pupin’s great success was the solution of the problem of long-distance telephone transmission by use of inductance coils, which he tested in practice. His discovery permitted the transmission of telephonic signals between cities, what was enormous leap forward in the development of telephony. The importance of this discovery was only lessened in the 1930s, following the development of electronics, but up to day Pupin’s system is being used in some special cases. After these discoveries, the name of Michael Pupin, highly respected in scientific world, became widely known to the public in the United States and in Europe. Pupin had become rich and famous. Work on practical problems of the application of the Pupin’s system in telephony occupied him to such extent that he dropped out of mainstream of research in the fundamental problems of physics, the area in which he had begun his career. Dealing with the many problems arising in the application of the Pupin’s system, Pupin arrived at new solutions in utilization of alternating current. From 1901, when he received tenure as professor, Pupin’s successful scientific and teaching career proceeded apace until 1929, when he retired.

In recognition of his success, Pupin was elected president or vice-president of the highest scientific and technical institutions, such as the American Institute of Electrical Engineers, the New York Academy of Sciences, the Radio Institute of America, and the American Association for the Advancement of Science. For his inventions Pupin filed a total of 34 patents in the period between 1894 and 1934. Almost all the patents are from the field of telegraphy, telephony and radio. During his lifetime he received a large number of diplomas and medals in recognition of everything that he had invented. He published several books between 1894 and 1930. Of major interest are his Thermodynamics, and his autobiography, published for the first time in the United States in 1923, with the title From Immigrant to Inventor. Until the end of his life, Pupin maintained close contacts with his compatriots and helped them in various ways. He had set up a number of aid funds and made a considerable contribution to the drawing of Yugoslavia’s frontiers in 1919. Pupin died in New York City in 1935.

Note: This material was taken from the book Lives and Work of the Serbian Scientists, Editor Miloje Saric, published by Serbian Academy of Science and Arts in 1996 in Belgrade.